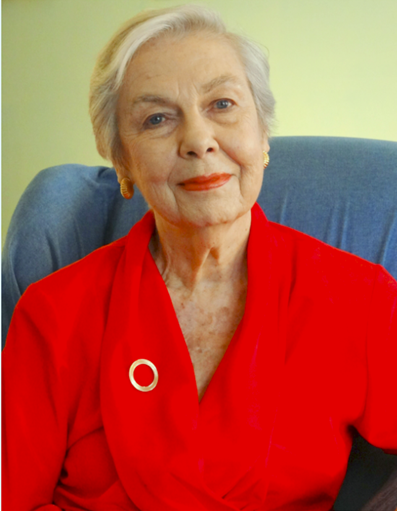 The El-Hibri Foundation awarded Betty Reardon the El-Hibri Peace Education Prize on October 2, 2013. Dr. Reardon is founding director emeritus of the International Institute on Peace Education, founding academic director of the Global Campaign for Peace Education for the Hague Appeal for Peace, and winner of the 2010 Sean McBride Peace Prize awarded by the International Peace Bureau in Geneva. She is one of the most widely cited peace educators in the world and well recognized as a founding figure in the field of peace studies.  She has initiated and sustained key institutions, educational programs and networks of peace leaders around the world. The El-Hibri Peace Education Prize carries a cash award of $20,000, and places Dr. Reardon among highly respected fellow Laureates.

On the cusp of the International Day of Peace, the El-Hibri Foundation announces that it will present its annual Peace Education Prize to the 2013 Laureate, Dr. Betty A. Reardon, at an invitation-only ceremony on October 2, 2013 in Washington, D.C. Reardon is a mentor to and educator of thousands of teachers and thought leaders in the field of peace education. As the author of hundreds of articles, books, curricula, teachers’ guides and volumes on alternatives to war and violence, she is one of the most widely cited peace educators in the world. Many recognize her as a founding
figure in the field of peace studies. She has initiated and sustained key institutions, educational programs and networks of peace leaders around the world.
Reardon is an initiator of graduate courses and a long serving instructor at Columbia University Teachers College, founding director emeritus of the International Institute on Peace Education, founding academic director of the Global Campaign for Peace Education for the Hague Appeal for Peace, and winner of the 2010 Sean McBride Peace Prize awarded by the International Peace Bureau in Geneva. The El-Hibri Peace Education Prize carries a cash award of $20,000, and places Reardon among highly
respected fellow Laureates.
As a school teacher in the 1950s, Reardon began to question the necessity of war, violence and exploitation. She wrote lesson plans and units to help teachers cultivate peaceable classrooms, schools, communities, societies and nations. Reardon introduced these materials and concepts to school systems and colleges of teacher preparation. From her early, pioneering efforts, peace education as a field has rapidly expanded, to more than 400 degree programs at colleges and universities worldwide.
Student enrollments have doubled in some leading universities over the past decade, as reported in a 2008 New York Times article about the increasing interest in peace studies among youth.
Colman McCarthy, 2010 El-Hibri Peace Education Prize Laureate, commented of her, “As both a peace educator inside the classroom and a peace advocate in the world outside, Betty Reardon has been tireless in getting out the word that alternatives to violence are not only possible, but workable.”
Peace education is now a broadly respected and rapidly growing international
phenomenon, with profound implications for future generations. It has contributed to the American public’s aversion to war, particularly among youth, as tens of thousands of peace studies graduates take their place in society.
While conflict and social change are inevitable, violence is not. Peace education provides an alternative to violence at all levels by raising awareness about individual dignity, human rights, equality and interconnectedness to one another and our environment. Peace education develops communication and collaborative skills to resolve conflicts nonviolently, builds empathy and empowers learners to be agents of constructive social change.
“Betty Reardon is a towering figure in peace education. She has brought
academic legitimacy to a bold, inspiring field. Her work has infused peace into our national narrative,” notes Fuad El-Hibri, Chair of the El-Hibri Foundation’s Board of Trustees.
Reardon’s books on gender in peacebuilding, the relationship between military
institutions and the exploitation of women, and the importance of human dignity have been translated into Arabic, Russian, Spanish, Japanese, Azerbaijani and many other languages, extending her reach and influence on human rights and peace education around the world.
Judy Barsalou, El-Hibri Foundation President, called Reardon, “a prolific educator of educators. Her living legacy is the cultivation of generations of leaders and teachers in peace education and the fashioning of institutions in which they collaborate and thrive.”
Reardon holds an Ed.D. from Columbia University, an M.A. from New York University and a B.A. from Wheaton College. According to experts in the field, one of her most significant professional achievements is establishing the International Institute on Peace Education, which received special honorary mention from the UNESCO Peace Education Prize.
Previously-recognized Laureates include:
Chaiwat Satha-Anand (2012), founder and director of the Peace
Information Centre at Thammasat University in Bangkok, the Foundation for
Democracy and Development Studies and the Thailand Research Fund;
Gene Sharp (2011), founder and senior scholar at the Albert Einstein
Institution in Boston, MA, and author of many influential works on strategic
nonviolent activism;
Colman McCarthy (2010), founder of the Center for Teaching Peace,
Washington, D.C., and former Washington Post columnist;
Mary Elizabeth King (2009), professor of Peace and Conflict Studies at the
University for Peace and Rothermere American Institute Fellow at the University of Oxford;
Scott Kennedy (2008), co-founder of the Resource Center for Nonviolence
in Santa Cruz, and former mayor of Santa Cruz, CA; and
Abdul Aziz Said (2007), Mohammed Said Farsi Chair of Islamic Peace at
American University, and founder and professor at AU’s International Peace
and Conflict Resolution Program.