Congratulations to Our 2016 Peace Award Winners!

We are excited to announce the El-Hibri Foundation's 2016 award winners! These outstanding individuals promote inclusion, foster collaboration across difference, and demonstrate leadership that empowers others to make positive social change. 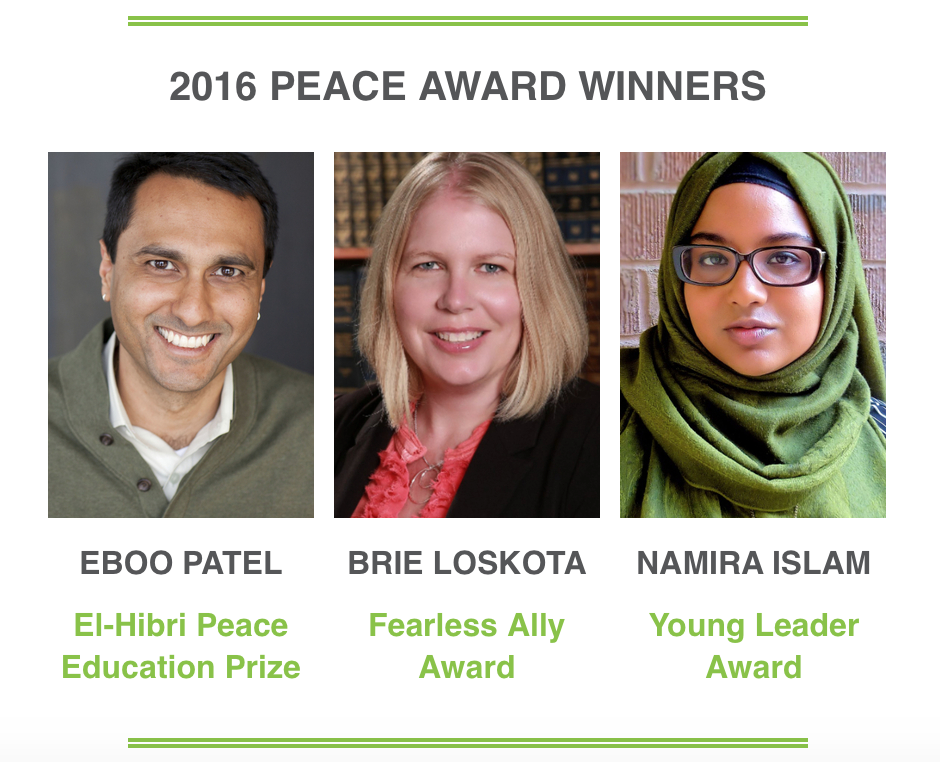 We are grateful to all who submitted nominations this year. Each of the nominees deserves to be recognized.

More about Our Award Winners

Dr. Eboo Patel, founder and president of Interfaith Youth Core (IFYC), will receive the 2016 El-Hibri Peace Education Prize for his long-term leadership in building inclusive and socially just communities in the U.S. Dr. Patel founded IFYC in 2002 with the goal of making interfaith cooperation a social norm. Today, IFYC has become the largest interfaith organization in North America, partnering with college campuses to foster and develop institutional cultures of mutual understanding, respect, inclusion, and collaboration. Each year it trains 500 college students to be interfaith leaders and reaches nearly 1,000 college campuses with its messages and programs. Through IFYC, Dr. Patel’s work has advanced interfaith studies as a new academic discipline which is recognized today as a field of study and taught in over 100 colleges. In 2009, he served on President Obama’s Inaugural Faith Council and helped launch the President’s Interfaith and Community Service Campus Challenge, which engages over 500 campuses each year in high-quality, sustainable interfaith work. Dr. Patel has consulted with the White House, U.S. Department of Education, the Tony Blair Faith Foundation, and many others to share best practices for interfaith programming and cooperation. He is the author of Acts of Faith, Sacred Ground, and Interfaith Leadership: A Primer.

Brie Loskota, executive director of the University of Southern California (USC) Center for Religion and Civic Culture (CRCC), will receive the 2016 Fearless Ally Award for demonstrating courageous leadership working for the inclusion of American Muslim communities. Ms. Loskota is the co-founder of the American Muslim Civic Leadership Institute (AMCLI), a groundbreaking program that is tackling a critical need in American Muslim leadership development. AMCLI has trained over 220 American Muslim community leaders across America and has helped support over 100 organizations in their efforts to become more effective partners in social change. AMCLI is one of many programs at CRCC that builds capacity among faith-based organizations and their leaders. Through CRCC, Ms. Loskota also works to create partnerships between federal, state, county, and city governments and faith groups. She serves on the board of nonprofit organizations that work at the intersection of religion, pluralism, and the public square including NewGround: A Muslim-Jewish Partnership for Change, Religion Dispatches, LA Voice PICO, The Guibord Center: Religion Inside Out, and Jewish World Watch.

Namira Islam, co-founder and executive director of the Muslim Anti-Racism Collaborative (MuslimARC), will receive the 2016 Young Leader Award for demonstrating collaborative and inclusive leadership in American Muslim communities. In 2014, Ms. Islam co-founded MuslimARC, an organization dedicated to fostering a deep appreciation of diversity, exchange of meaningful dialogue, and self-reflection in Muslim communities. MuslimARC designs anti-racism curricula and educational materials, conducts formal studies on race relations in North American Muslim communities, facilitates racial justice trainings, and consults with organizations seeking to develop inclusive practices. MuslimARC’s on-the-ground programming has reached over 1,600 people in less than two years. Ms. Islam is also an attorney who has practiced in poverty law, providing legal services to low-income individuals in Flint, MI. Her experience in anti-racism work has included conducting research on the UN Declaration of Human Rights Education and Training. She has also interned at the trial and appellate levels in international criminal law for the United Nations in The Hague.