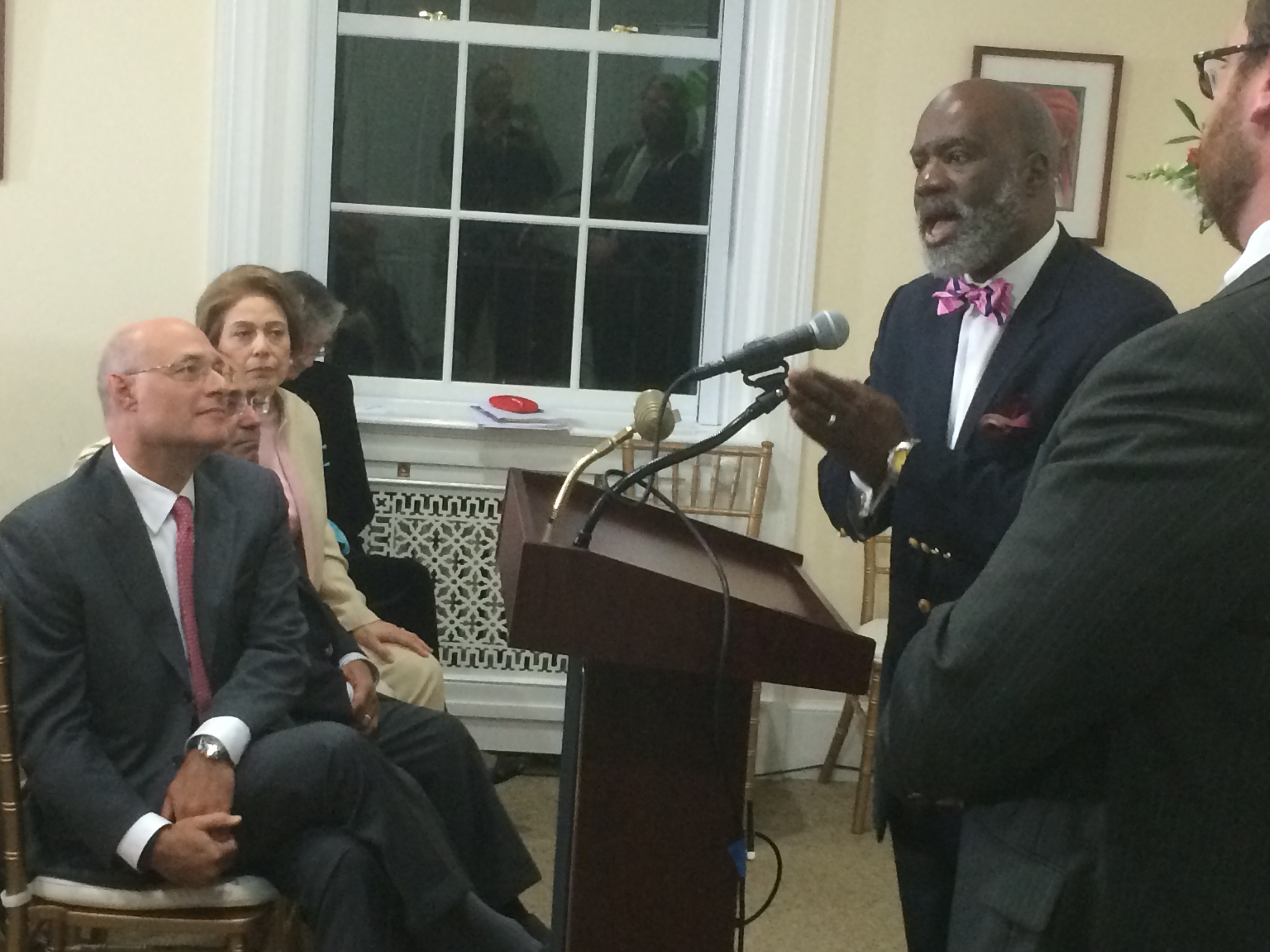 Dr. Sherman A. Jackson Addresses DC Iftar
On Vindicating a Role for Religion in Public Life

Washington, DC - July 15, 2014 – Featuring the reflections of celebrated lecturer and distinguished USC professor, Dr. Sherman A. Jackson, the El-Hibri Foundation (EHF) chose a shared day of Muslim and Jewish fasting to host the Fourth Annual Ibrahim El-Hibri Interfaith Lecture and Iftar.  Today marked the eighteenth day of Ramadan for Muslims, as well as the Jewish fast of the seventeenth of Tammuz, the start of a three-week mourning period to reflect upon the destruction of Jerusalem and the two Holy Temples.

Leaders from the Abrahamic faith traditions, as well as Washington dignitaries, came together for the annual discussion and dinner at the Foundation’s downtown building.  Jackson spoke about the responsibilities of the Abrahamic faiths in vindicating a role for faith in public life. (Full speech here via YouTube).

Jackson called upon participants to see ways in which the modern state has worked to “domesticate religion.”  He noted that “what this has ultimately bequeathed to us…is a set of religious sensibilities…religious presuppositions…that extol tolerance as the ideal, the apex.”  But he challenged that, “a single-minded obsession with tolerance and mutual recognition (of faiths)…can undermine a religious community’s ability to achieve any goals beyond that of mutual recognition.”  He depicted any religion’s singular alignment with tolerance as a goal as contributing to a “form of voluntary totalitarianism,” and invited faith communities to move to a “more corporate understanding of the role of religion.”

Fuad El-Hibri, Chair of the El-Hibri Foundation’s Board of Trustees, noted how his father, Ibrahim, for whom the annual Lecture and Iftar series is named, “understood the importance of interfaith dialogue and the necessity of moving beyond mere tolerance.”  The Chair added that Ibrahim was often recognized for being “at one and the same time both very pious and yet remarkably inclusive in his approach to and respect for other religions.”

President Judy Barsalou reviewed a remarkable year of expansion and strategic development for the Foundation.  Barsalou said, “We believe that we have a unique opportunity as a Foundation to highlight the contributions made by Muslims to two emerging fields – peace building and interfaith cooperation.”

The El-Hibri Foundation is an American 501(c)(3) charitable foundation based in Washington, D.C.  EHF fosters peace and respect for diversity through grants, programs and other activities to advance the fields of peace education and interfaith cooperation.