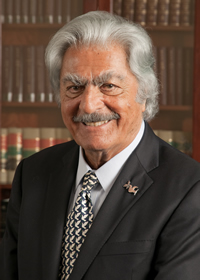 Professor Abdul Aziz Said serves as the Mohammed Said Farsi Chair of Islamic Peace at American University in Washington, DC, where he is senior ranking professor of international relations in the School of International Studies.
Widely known for his  dedication to the cause of peace, he has played a preeminent role in educating and mentoring generations of students over the course of more than 50 years at American University.

A builder of institutions, Professor Said is director-emeritus and founder of American University's Center for Global Peace, and founding director of the International Peace and Conflict Resolution Department at the School of International Service.  He is a sought-after lecturer and participant in national and international meetings and activities organized by the US Information Agency, the Department of Defense, the United Nations Development Program and the White House Committee on the Islamic World, among others.  Professor Said has written or edited more than a dozen books and served on the Board of Directors of Search for Common Ground.  He has a Ph.D. from American University.