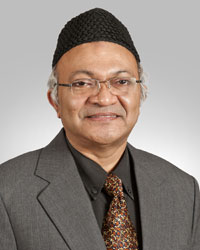 Professor Chaiwat Satha-Anand is one of the foremost voices for peace in Thailand.  As a senior faculty member at Thammasat University, he has educated generations of Thai students and conducted innovative research on peace.

Professor Satha-Anand previously served as the chair of the Nonviolence Commission of the International Peace Research Association.  In 2003, he was nominated to head efforts to decrease violence in southern Thailand when he was  appointed to the National Reconciliation Commission and was the key author of its final report to the Royal Thai Government.

Professor Satha-Anand is the founder and director of the Thai Peace Information Centre, which conducts studies and activism in relation to the Thai military and social issues.  He has published numerous articles and book chapters on the military, alternative defense, religion and peace, Islam and nonviolence, and modern political philosophy.  He currently is a member of the Scientific Committee of the International University for Peoples' Initiative for Peace, IUPIP, in Rovereto Italy.