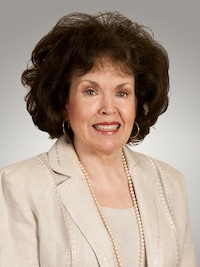 Dr. Mary Elizabeth King is professor of peace and conflict studies at the United Nations-affiliated University for Peace, which has its main campus in Costa Rica.  She is also a distinguished scholar with the Center for Global Peace at American University in Washington, DC and a Rothermere American Institute Fellow at Oxford University.

Dr. King's work has focused on  peace education and nonviolent civil resistance.  Among her many publications is the highly acclaimed A Quiet Revolution: The First Palestinian Intifada and Nonviolent Resistance, published in 2007.  Her most recent book, The New York Times on Emerging Democracies in Eastern Europe, published in 2009, chronicles the peaceful transitions from Soviet rule that occurred in Poland, Hungary, East Germany, Czechoslovakia, the Baltic States, Serbia, Georgia and Ukraine.

Dr. King has worked with President Jimmy Carter as a special advisor since the early 1970s, including on the Israeli-Palestinian conflict.  As a presidential appointee in the Carter Administration, she had worldwide oversight of the Peace Corps and other U.S. volunteer service corps programs.  During the U.S. civil rights movement, she worked alongside Reverend Dr. Martin Luther King, Jr. in the Student Nonviolent Coordinating Committee, an experience that defined her life.  In addition to her work in the field of peace education, she has been active in international relations for 35 years, meeting with heads of state and government ministers of more than 120 countries.

Dr. King earned a doctorate in international politics from the University of Wales at Aberystwyth in the United Kingdom.