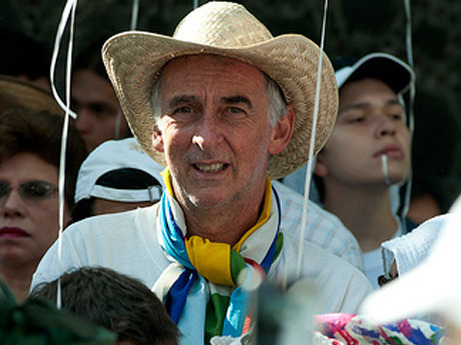 Washington, DC – September 19, 2014 – At a gathering of supporters of peace education, Fuad El-Hibri, Chair of the El-Hibri Foundation’s Board of Trustees, announced the selection of Pietro Ameglio as the 2014 El-Hibri Peace Education Prize Laureate.  At an invitation-only ceremony on October 15, Ameglio will receive the award and the $20,000 cash prize.  Three graduate students will also receive $5,000 scholarships at the ceremony to further their peace education studies.

Ameglio is an activist and peace educator who is one of the most important teachers and practitioners of active nonviolence in Latin America today.  He has co-founded many vehicles promoting peace in Mexico, including the Mexican Peace and Justice Service (SERPAJ, 1987), a chapter of the SERPAJ nonviolence network spanning Latin America; Thinking Out Loud (Pensar en Voz Alta, 1995), a Gandhian-inspired nonviolent action collective to analyze and publicize statistical information on the nature of social conflict in Mexico and promote nonviolent direct actions; and the Movement for Peace with Justice and Dignity (MPJD, 2011), along with poet Javier Sicilia and the families of dead and missing persons.  He has authored the book, Gandhi and Civil Disobedience: Mexico Today (2002).

Ameglio has decades of experience exploring the power of nonviolence to promote justice and peace.  He strategized with the MPJD to organize numerous mass actions against violent conflict in Mexico, including the “Silent Walk,” a march from Cuernavaca to Mexico City that concluded with more than 200,000 people hearing the testimony of survivors and victims whose suffering has largely been ignored.  Ameglio worked with others from the MPJD to create the “Caravan of Consolation” and the “Caravan to the South,” which traveled through the areas of México hardest hit by the violence and provided a platform for victims’ families to become active in the struggle for victims’ rights.  All of these activities have tapped into what Ameglio refers to as “the moral reserve” of the Mexican people, the positive values and moral sensibilities that characterize Mexican culture

Born in Uruguay but educated in México, Ameglio is an historian with a Master’s degree in Contemporary History.  For 18 years he served as Chair of the Humanities Department at La Salle University in Cuernavaca.  Combining theoretical knowledge of peace education with practical experience, he has created innovative learning opportunities for students, such as peace camps in Chiapas. Working with SERPAJ and Pensar en Voz Alta, Ameglio has helped develop curricula used by the autonomous education system in Chiapas.  He holds two Special Chairs within the School of Philosophy and Literature at National Autonomous University in Mexico City.

Chaiwat Satha-Anand (2012), founder and director of the Peace Information Centre at Thammasat University in Bangkok, the Foundation for Democracy and Development Studies and the Thailand Research Fund;

Gene Sharp (2011), founder and senior scholar at the Albert Einstein Institution in Boston, MA, and author of many influential works on strategic nonviolent activism;

Scott Kennedy (2008), co-founder of the Resource Center for Nonviolence in Santa Cruz, and former mayor of Santa Cruz, CA; and

Judy Barsalou, President of the El-Hibri Foundation, noted with appreciation the large pool of qualified nominations from which Ameglio was chosen by an independent selection committee managed by Nonviolence International.  She commented that this year EHF “intentionally expanded the Prize’s eligibility categories to encompass the wide range of leaders who have championed peace education – policymakers, practitioners, community activists and scholars.”

Founded in 2001, the El-Hibri Foundation is an American 501(c)(3) charitable foundation based in Washington, D.C.  It seeks to build a better world by embracing two universally shared values of Islam—peace and respect for diversity—and it fulfils its mission through grants, programs and other activities designed to advance the fields of peace education and interfaith cooperation.  EHF and its grantees incubate new ideas, create programs that address unmet needs, and stimulate intellectual exchanges and networking.  More information about the Foundation is available at www.elhibrifoundation.org.