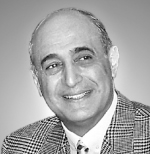 The El-Hibri family established the El-Hibri Foundation in 2001.  It is a tribute to the memory of Ibrahim El-Hibri (1936-2007), who made a substantial gift to the Foundation to continue his family’s long commitment to helping the less fortunate and promoting interfaith understanding.

A successful businessman and devout Muslim, Ibrahim El-Hibri believed in the commonality of the three monotheistic religions—Christianity, Judaism and Islam—and stressed their similarities instead of their differences.  His focus on tolerance, civic engagement and social responsibility were expressed in many philanthropic endeavors.

Ibrahim El-Hibri’s legacy has been carried on by his children, his siblings, and his grandchildren and their families.